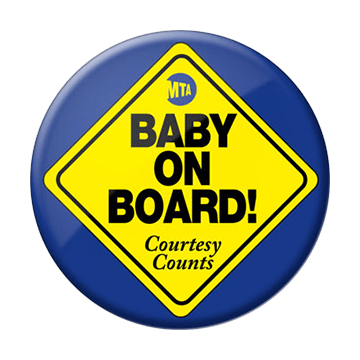 Should you always ask – Do you want to sit down?

I was on public transport recently and it was a while before I noticed a lady standing.

She was maybe in her late 20s and I couldn’t tell whether she was pregnant. She hadn’t asked for a seat, she didn’t rub her stomach or make any obvious signs to indicate that she was pregnant and wanted to sit down, and she could have been just a larger size or had a post baby body.

After some time assessing the situation I worked out she was probably not pregnant but I didn’t want to embarrass her or myself by asking.

I have been pregnant and needed to catch public transport. In those situations I have been offered a seat but I usually would not get on a bus if it was already full because I didn’t want to get stuck having to stand for the duration of the journey if someone didn’t offer me a seat.

Over the years I have heard of public transport systems trying to encourage people to offer seats to the elderly or disabled or people who may require special assistance.

In London they introduced a free Baby on Board badge to let others know you have a good reason for wanting a seat.

In New York the Metropolitan Transportation Authority have introduced free courtesy buttons as part of its voluntary courtesy campaign. There is a general one for those that may not show outward signs of a disability as well as a pregnancy specific one. 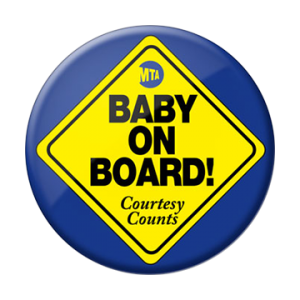 There was talk of a badge system being introduced in Australia earlier this year but it hasn’t happened yet as far as I know. While there’s nothing stopping individuals from making their own badge up (although overseas they are funded by the public transport system), there needs to be a public campaign similar to the ones in London and New York by the public transport system to build the awareness of the badges and what they mean.

During the early stages of pregnancy, some women may not display any signs of being pregnant but experience nausea and feeling unwell.

I don’t know whether all pregnant women would feel comfortable displaying a badge or whether anyone would take notice of it but it would have helped me the other day to work out whether I should speak up without the worry about offending the lady.

I was sitting towards the back of the bus recently and a mother got on the bus with a pram. After repeated attempts to get the attention of the man sitting where the wheelchair accessible area was she was able to safely park the pram in the correct spot. The man who had moved had only moved to the seat closest to where the pram was stationed so the mother ended up having to stand next to the pram. There were plenty of other seats on the bus but I guess the mother did not want to ask the man to move again. After a few minutes a man politely approached the man who was sitting next to the pram and explained that if he moved then the mother would be able to sit next to the pram and he offered his seat to the man even though there were others available. The man looked surprised and moved to a nearby empty seat. I honestly think he did not realise and was just not aware.

I wasn’t close enough to the man to applaud what he had done but I was extremely moved that he made the effort. I was disappointed at how distracted the other man must have been to not notice in the first instance the mother trying to get his attention to park the pram and that he was sitting in the only chair that was close to the parked pram.

The way the incident was resolved brightened my day. I think it is important that we all try and be aware of our surroundings and the needs of others nearby.